Google Analytics allows you to create alerts so that you get an email as soon as a specific condition is triggered. These can be used to let you know of unusual spikes (or decreases) in traffic the day after they happen – this is incredibly useful in alerting you to something that needs your attention like a tracking error or the effects of an algorithm update.

How to create an alert in Google Analytics

The next section shows some of the alert configurations I have set up. These can be altered depending on your own experience of your website traffic.

Below are some of my favourite Google Analytics alerts that help me diagnose bot traffic, as well as tracking issues and website changes.

An alert that emails you when sessions hit zero – an indicator that Google Analytics tracking has been removed from the website. 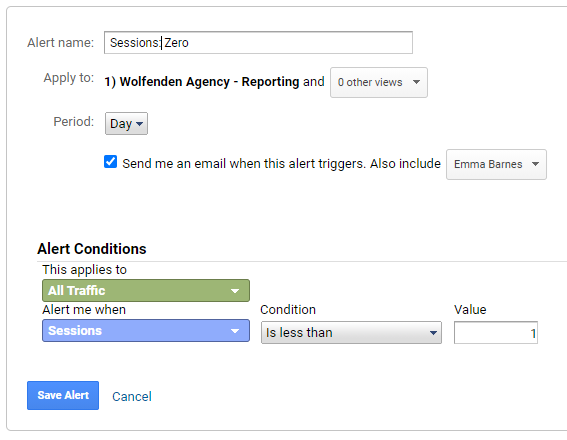 If you work on a specific channel (organic search, paid search, etc.), it can be useful to have a WoW alert that shows a large traffic drop compared to the previous week. The percentage can be adjusted depending on what would be unusual for your traffic. 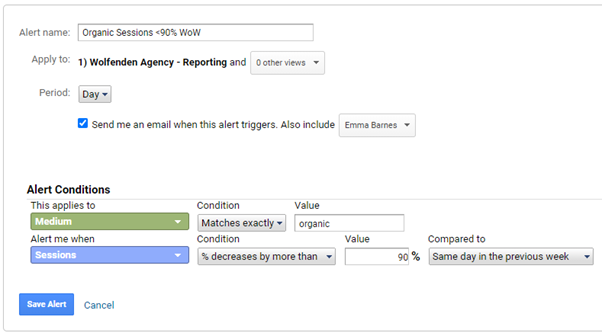 You cannot use ‘goal completions’ as a metric for alerts, so instead you can use ‘conversion rate’. If conversion rate drops so much it’s likely that the website has changed and the goal settings no longer work. This can be specified at goal level. 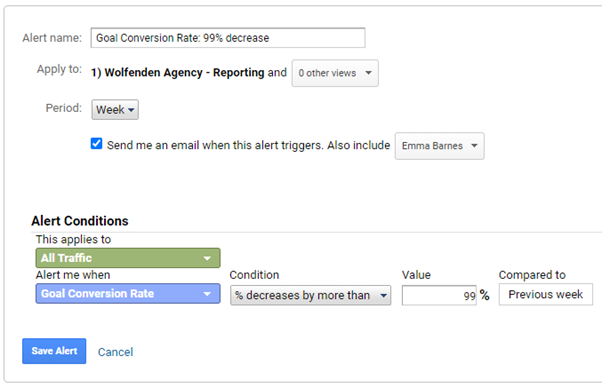 4. Direct traffic increases by more than 100%

A sudden, large increase in direct traffic is an indicator of bot traffic. If this alert triggers it’s worth reviewing the traffic of that day. 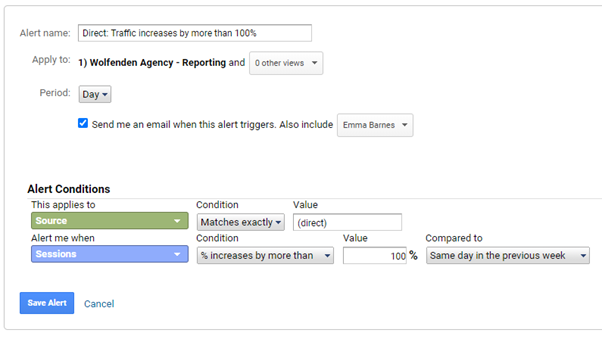 Combined with the above alert, if direct traffic has a bounce rate approaching 100% it is a good indicator that there is bot traffic being sent to Google Analytics. This can be modified depending on the typical bounce rate of your direct traffic. 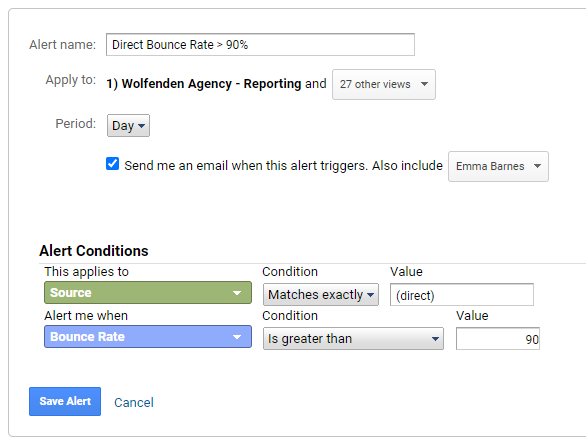 If you capture events such as:

You can create an alert that triggers when those events are higher than a certain threshold. This allows you to know there may be a website issue that needs fixing. 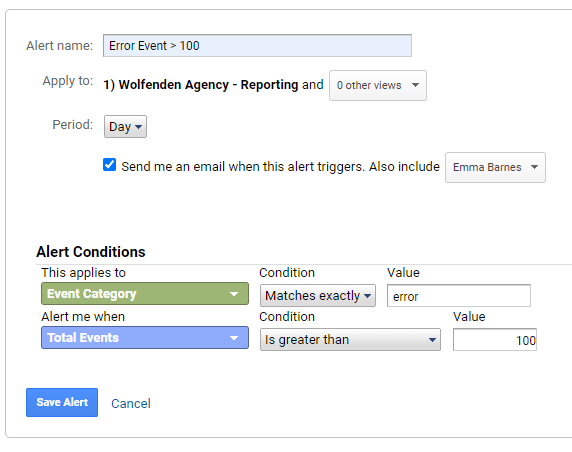 Linux is an operating system often used in executing applications and less often used by humans. A large increase in Linux traffic is an indicator of bot traffic being captured. The threshold or percentage change should be determined based on your current Linux traffic. 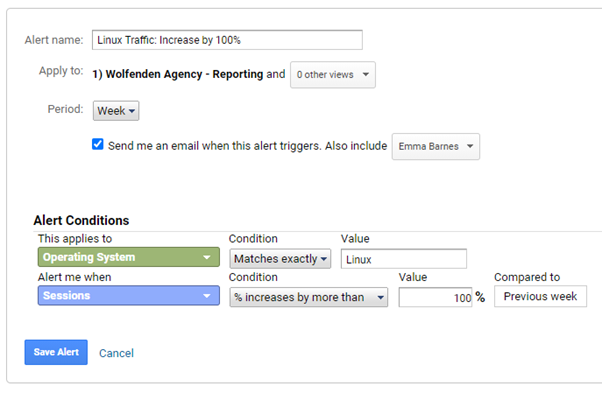 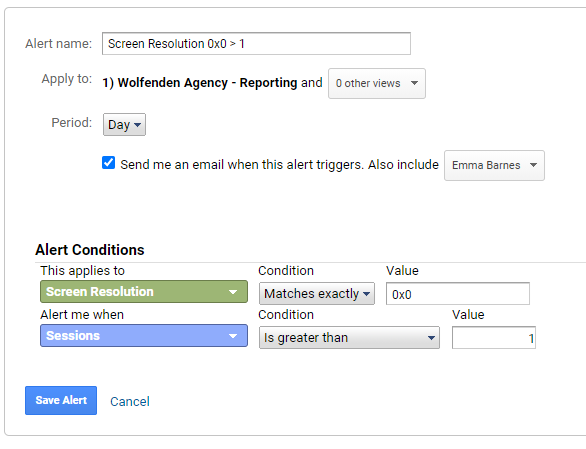 This should be changed depending on your country of operation. A large increase in non-UK traffic on a WoW basis may be worth investigating. 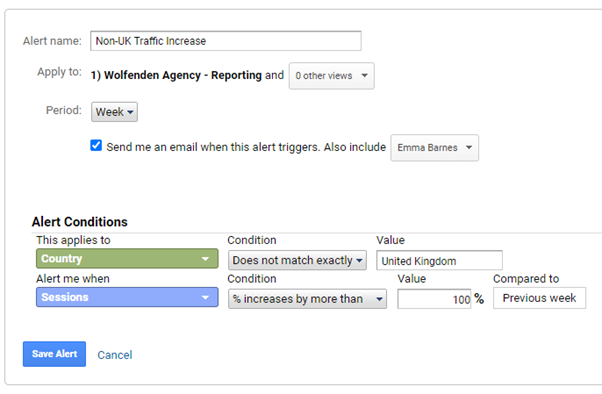 Ashburn, Virginia is a town in America with a small population but a lot of a data centres. A sudden increase in traffic from Ashburn is an indicator of bot traffic, or a tool such as a crawler or penetration testing being passed to Google Analytics. 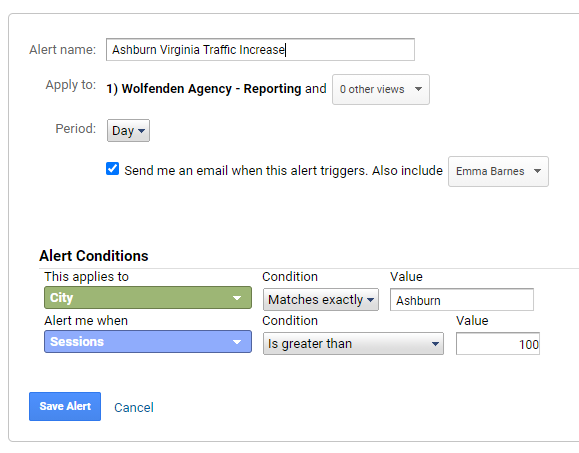 What should I do if there is bot traffic?

If there is bot traffic coming to your website there are few things to do. Firstly, annotate this in Google Analytics.

Once you’ve identified it, create a filter to remove it going forward. This may be a hostname exclude filter or a filter to exclude traffic based on the alert that caused it (such as 0x0 browsers or traffic from Ashburn).

Try this filter on a testing view before applying to your main reporting view, and ensure the traffic removed is as expected. Try to remove as little legitimate traffic as possible (e.g. if Linux traffic is up, don’t remove all Linux traffic, it may be a particular version of Linux that is causing the influx in traffic).

If there is no way to remove ‘only bot’ traffic – weigh up the accuracy of over reporting vs. under reporting and do what is best for your analytics property health.

If you’re experiencing unusual traffic or require some Google Analytics advice please do not hesitate to contact us.

The importance of tone of voice

How to add UTM parameters to (most) social media platforms

10 common Google Analytics problems and how to solve them

Which tools to use to support your content strategy